Throughout its history the schools in the county have been a gathering place and a civic anchor for the people of the county. This was especially true in the African-American community. However, today we share with all members of the community, our cultural heritage. The Historic Jarvisburg Colored School will represent the history of all the former Colored schools in the county.

In Sept. 1867 the CurrituckBoard of Commissioners decided to re-establish new townships for voting registration and tax purposes. They were:

Each township had its own churches and it seems that some of the churches in each township took on the responsibility of operating a school for the newly freed Colored people next to the churches.

There are existing records that indicate that the Jarvisburg School was opened in 1867 in Powells Point, N.C. The school was moved to its present site during the 1890s. The old building was last expanded to its current size as a school in 1911.

The Colored Schools were consolidated in the 1950s and the old buildings were sold by the county as surplus. All the schools were integrated in the 1960s and this building would no longer serve as a school.

1868: Deed of Gift by Wm. Hunt to Trustees for the free school of the colored people on Powells Point for the first Jarvisburg Colored School

1882: Deed of gift by William Hunt, Sr of ¼ acre to the School Committee of the 19th School District of Currituck County. For said consideration: “The regard for and love I bear for the rising generation of the colored race…: For the use of a school in said district for the benefit of the children of the colored race…”

Mid-1880’s: School board records for Public Instruction mention that there are 12 public schools for colored children; 304 colored males; 282 colored females.

1894, July 14: An additional gift of 1/2 acre of land to the Jarvisburg School from Mr. and Mrs. Stephen Gordon. It was around this time that the church and the school were re-located to the current site in Jarvisburg. 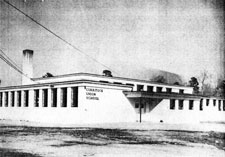 1951: Corinth Baptist Church purchased Jarvisburg School for $1,000. It was then used by the church and community, as well as by the Masons until disrepair.

1966: School Board approved the Freedom on Choice School Plan following the 1964 Civil Right’s Act. This began the consolidation of schools into an integrated system.

1998: HJCS alumni and church members began efforts to save and restore the school

2003: The Historic Jarvisburg Colored School Association was organized to preserve the school and the legacy of all the colored schools in Currituck County.

In 1890 the area to become the Gregory school was located in the Crawford District. By 1905 vouchers were paid to 5 Negro teachers in five different one room schools in Crawford Township and in 1916 vouchers were paid to seven teachers. The School Board decided to purchase land to erect a Negro School in Gregory on June 4, 1923. However, it was not until Feb. 16, 1928 that a bid was received for a 3 teacher Rosenwald School be erected at Gregory. The school was to be built by A.L. Hudgins for a low bid of $4,269.50 on a two acre plot of land purchased for the school. The school would house children from Shawboro, Indiantown, and Gregory. This building was vacated in 1950 and sold to C.S. Staples for $1,250 on Jan.2, 1951.

In 1890 vouchers were paid to 3 Colored Teachers in three different one room school in the Moyock Township. By 1916 vouchers were paid to 4 Colored Teachers. On Sept. 5, 1921 a motion was placed before the board for the building of Moyock #2 Colored school house to be built according to the Louisiana-NC School House Plan # 400 after the amounts of $1,000.00 borrowed by the district and $1,200.00 to be made available from the Rosenwald Fund. Two acres of land at Moyock, south of the main road, were purchased between the two colored churches for the school. On Jan 16, 1922, vouchers were paid for 6 teachers at the Colored Moyock school. This building was vacated in 1950 and purchased by George E. Meiggs for $1,000.

The Coinjock area is in the southern end of the #2 Crawford Township. By July 7,1905 vouchers were paid to 6 Colored Teachers in 6 different one room school houses. On Jan.5, 1914, a few Colored families in Moyock Township asked to send their children a shorter distance to the Crawford #3 school. The request was denied. At that time Crawford Township included the Indiantown, East Ridge, Snowden, Tulls, Currituck, Griggs, and Coinjock areas. On Aug. 4, 1919 a motion was made and carried that Crawford #6 and #7 be consolidated into one district and that the children of both districts be allowed to attend the Rosenwald School now being built (in Coinjock). Later children from the northern end of the Poplar Branch area were sent to the new school. This building was vacated in 1950 and later purchased by Judge Chester Morris for $600.

Currituck County Training School established in 1931 was the first high school for Colored Children in Currituck County. On Aug.3, 1931, it was agreed to purchase the old Snowden Negro Chapel which had been an A.M.E. Zion Church for grades 8 and 9. The board also agreed to hire vocational teachers for the colored school and to house them in the nearby lodge building. By July 1940 it was noted that the Colored Schools were woefully inadequate and the Board of Education suggested building a central school to house Negro students. On Sept. 14, 1944, The Currituck County Training School old church building was so damaged by a hurricane that it could not be used for instructional purposes. The Board authorized that the old church building be raised and a new two-room frame building be erected as soon as possible. However the Old White School building from Jarvisburg was purchased and pulled by tractor to the site. On May 1, 1950, the CCTS doors were closed due to the opening of the consolidated Currituck Union School in Barco, NC. This building was vacated in May of 1950 and later purchased by Mary Etheridge for a sum of $2,300 on April 3, 1951.

Listed on the National Register of Historic Places | December 11, 2009